Katy looks after the running of our Garden, Health & Community project providing social spaces, a mobile food pantry and an allotment garden open to the community throughout the week. Here she talks about how Project Grow was founded and why it is such an important part of Cre8's work within the community. 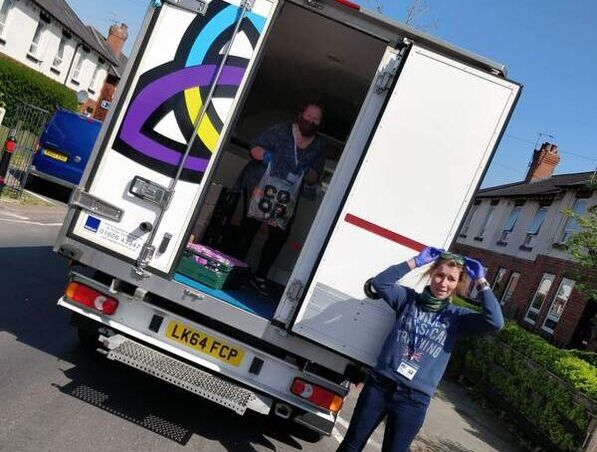 I’d called at Aldi to pick up the day’s surplus food, like I do every weekday. Some days there’s just one crate – a bit of bread, apples and bottled water – some days there are 15 crates and enough to feed a small army! Today was one of those days! The boot of the minibus was full of veg, bread, flowers, and cereals! A random selection and I wasn’t sure what I was gonna do with it!

I’d had a message a few days before from a guy up on the Weston Estate asking if we had any spare food. He said he was ‘struggling’. Everyone always says that when they phone – I think they feel like they should or that they need to. I text him back to let him know we had shed loads of random bits of fresh food and that I needed to pass it on asap. Would he be in if I called up later? And did he know of anyone else who might want some food?

I drove up in the minibus and parked outside the flats where he lived. He was waiting for me at the window and I waved and smiled and pointed at the van. He disappeared from the window and a few minutes later came out of the door. He came over, and looked in the boot of the minibus. “Wow, this is fantastic” he said “we can make so many things with this” his face lit up.

“Do you know anyone else who might want something” I asked “Ideally all this needs to go today otherwise it’ll have to be chucked and I really don’t wanna do that”.

“Hang on, let me go knock on some doors and see. I’m sure Iris could do with some bits…” He disappeared off.

I watched as he went around the little bungalows surrounding the flats, knocking on, chatting with his neighbours and bringing them out. They were a little sceptical, but they came. They trusted him and it was obvious he looked after them. Off into the flats he went and came back with more people. I think he rounded up about 10 people. As they all started coming towards me and the minibus I realised I needed to get ready for this! I set out the crates, tried to get a bit of order in place with everything we were giving away. I was like a little market stallholder!

And they came and they filled their bags with food and they chatted about what they could make for each other and their families. They took flowers to give to their children, and to put on graves of loved ones. And they wandered back to their homes shouting thankyous and being so smiley and grateful towards me, and each other.

I absolutely loved this. This is when I see and experience God & Kingdom. This guy didn’t have to go around spending his morning helping me give out food. He doesn’t know me or owe me anything. But he gathered his neighbours and those he knew might need this. Sharing, giving and coming together around food, for me, is where Gods at. Jesus seemed to love food; he ate it, shared it and told stories about it. He brought people together around food.

Project Grow is about redistributing surplus, spare food that would otherwise go to waste. We’re doing this through collecting and distributing food at ‘Hubs’ across Macclesfield using our vehicle ‘Betty’. This afternoon was one of the first ‘prototypes’ and radically influenced the way the Grocery operates and our vision for surplus food in Macclesfield; Everyone needs food and we will share what we have with whoever turns up or whoever we find. I am very blessed to be involved.

We ask for prayers for everyone who is experiencing the pain of hunger. We pray that surplus food makes its way to those who are hungry, and that we are able to help this happen.
< Return to the Stories Page